An Electromagnetic Compass (EMC) System which detects the Earth’s magnetic field and transmits the ship’s Heading over a digital NMEA 0183 connection to remote Heading Repeaters.

The Marine Data Systems MD71EMC is an Electromagnetic Compass (EMC) System which detects the Earth’s magnetic field directly. It then transmits the ship’s Heading over a NMEA 0183 digital connection to one or more Heading Repeaters installed at any convenient location on a vessel. The EMC has no moving parts – unlike a TMC (Transmitting Magnetic Compass) which detects the moving compass card of a ship’s compass in its binnacle.

The MD71EMC uses the latest technology to accurately process and convert the ship’s magnetic compass heading to NMEA 0183 heading data with unparalleled accuracy at speeds of up to 70 knots and rates of turn up to 20° per second. The system has been developed with improved magnetic correction facilities to reduce deviation effects caused by the magnetic influence of the craft. The compactness of the complete system makes it particularly appropriate where the size of the craft makes it physically impossible or financially imprudent to install a gyro.

The use of a Magnetic to Digital system

Parts included in this EMC system

**The MD71THD Control and Display Unit is capable of displaying the heading in numeric form as a basic heading repeater (compass repeater). However, we always recommend using a dedicated Marine Data Heading Repeater suitable for the precise purpose to which it will be used (a repeater for steering the vessel; a repeater taking bearings; a repeater to be mounted on the bridge wing, etc. See the full range here) 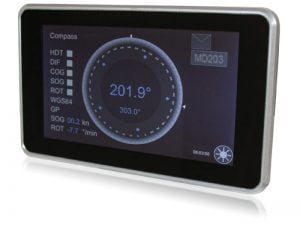 Scroll To Top
We use cookies to ensure that we give you the best experience on our website. If you continue to use this site we will assume that you're okay with that.OK